Deprecated: The each() function is deprecated. This message will be suppressed on further calls in /mnt/data/www/html/coepwiki/includes/MagicWordArray.php on line 197

Warning: Parameter 1 to GadgetHooks::registerModules() expected to be a reference, value given in /mnt/data/www/html/coepwiki/includes/Hooks.php on line 195
 Operating Systems 2015 - COEP Wiki

Prof. Abhijit A.M is the instructor for this course.

What is Linux Shell?
Computer understand the language of 0's and 1's called binary language.In early days of computing, instruction are provided using binary language, which is difficult for all of us, to read and write. So in OS, there is special program called Shell. Shell accepts your instruction or commands in English (mostly) and if its a valid command, it is passed to kernel.Shell is a user program or it's a environment provided for user interaction. Shell is an command language interpreter that executes commands read from the standard input device (keyboard) or from a file.Shell is not part of system kernel, but uses the system kernel to execute programs, create files etc.

What is Shell Script?
Normally shells are interactive. It means shell accept command from you (via keyboard) and execute them. But if you use command one by one (sequence of 'n' number of commands) , the you can store this sequence of command to text file and tell the shell to execute this text file instead of entering the commands. This is know as shell script.Shell script defined as:"Shell Script is series of command written in plain text file. Shell script is just like batch file is MS-DOSbut have more power than the MS-DOS batch file."

Variables in Shell
To process our data/information, data must be kept in computers RAM. RAM is divided into small locations, and each location had unique number called memory location/address,which is used to hold our data. Programmer can give a unique name to this memory location/address called memory variable or variable (Its a named storage location that may take different values, but only one at a time).


In Linux (Shell), there are two types of variable:

One of the major tasks involved in scheduling is picking the right scheduling algorithm. There are many ways one could decide to schedule tasks. But there are many factors to be considered while making such a decision.

This is a simple description of the UNIX system, which is also applicable to Linux systems -
"On a UNIX system, everything is a file; if something is not a file, it is a process."

There are various types of files in Linux:

A file system (or filesystem) is a means to organize data expected to be retained after a program terminates by providing procedures to store, retrieve and update data, as well as manage the available space on the device(s) which contain it. A file system organizes data in an efficient manner and is tuned to the specific characteristics of the device.
There are a variety of file systems that can be used between multiple operating systems based on what a user wants. Some types of file systems are:

Filesystems are created by using the mkfs command.There is actually a seperate program for each filesystem type.mkfs is just a front end that runs the appropriate program depending on the desired file system type. The type is selected with the -t fstype option.
The programs called by mkfs have slightly different command line interfaces. some of them are enlisted below (refer manpages for more):

Semaphore is another solution for race condition. A semaphore S is an integer variable that, is accessed through two standard atomic operations: wait() and signal(). For binary semaphore S can be either 0 or 1. When one process is modifying the semaphore value, no other process can simultaneously modify that same semaphore value.

In Operating system Memory Management is the function responsible for management and handling of computers primary memory.This function keeps the track of each and every memory location whether allocated or free. It checks how memory is allocated to the processes and also decides that which process should get memory at which time. It also tracks whether any memory is unallocated or freed and update the status of the memory corrospondingly.
Memory Management uses two registers (base and limit registers). Base register holds smallest legal physical memory address and limit register specifies the size of the range.Consider the following diagram to get this: 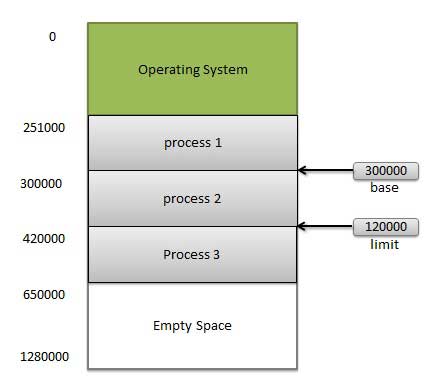 The mapping of symbolic names is done in following ways:

If it is known at compile time where a program will rwside in physical memory, then absolute code can be generated by the compiler, containing actual physical addresses. However if the load address changes at some later time, then the program will have to be recompiled.

If the location at which a program will be loaded is not known at compile time, then the compiler must generate relocatable code, which refers addresses relative to the start of the program. If that starting address changes, then the program must be reloaded but not recompiled.

If a program can be moved around in memory during the course of execution, then binding must be delayed untill execution time. This requires special hardware, and is the method implemented by most of the modern operating systems.

In dynamic loading, a routine of program is not loaded until it is called by program. All routines are kept on disk in relocatable format. The main program is loaded into memory and is executed. Other routines methods or modules are loaded on request. Dynamic Loading makes better memory space utilization and unused routines are never get loaded.

The term linking deals with the process of collecting and combining various modules of code and data into a executable file that can be loaded into memory and executed. Operating system can link system level libraries to a program. When it combines the libraries at load time, the linking is called static linking and when this linking is done at the time of execution, it is called as dynamic linking.
In static linking, libraries linked at compile time, so program code size becomes bigger whereas in dynamic linking libraries linked at execution time so program code size remains smaller.

Paging is a memory management technique in which the memory is divided into fixed size pages. Paging is used for getting a faster access to data. When a program needs a page, it is available in the main memory as the OS copies a certain number of pages from the storage device to main memory. Paging allows the physical address space of a process to be non-contiguous.
OS performs an operation for storing and retrieving data from secondary storage devices for use in main memory. Paging is one of such techniques for memory management. Paging is to deal with external fragmentation problem.
When a program (or task) references a logical address in memory, the processor translates the address into a linear address and then uses its paging mechanism to translate the linear address into a corresponding physical address.

Demand Paging
Operating system copies a disk page into physical memory only if page fault occurs(page is not in mem ory).
Steps are as follows-
Attempt to access page
If page is valid then continue processing if its invalid a page fault occurs.
If memory reference is valid then page in the required page else terminate the process.
Schedule the disk operation to read the page into main memory.
Restart the instruction.
Anticipatory Paging
Sometimes also called "swap prefetch", preloads a process' non-resident pages that are likely to be referenced in near future. It attempts to reduce the number of page fault.